Flu season is on the horizon. How prepared are you?

WHEN IS THE FLU SEASON STARTING THIS YEAR?

The flu season can vary in timing and duration each year, depending of the type of the flu viruses. It’s unpredictable because flu viruses can change every year, although fall and winter are the most common seasons to have flu outbreaks in the US.

Depending of how viruses are spreading, what vaccine is available and how many people get it, the length of the season and its outbreak can vary.

Even though it can outbreak starting with October and can last as late as May, the highest peak is reached between December and February.

This year Ebola has been in the headlines as the killer virus, although flu kills more people in one year – in the U.S. alone – than Ebola has killed ever in history worldwide. Flu and pneumonia combined consistently rank among the top 10 causes of death in the U.S., ranking eighth in 2011, the most recent year for which data are available.

FLU IN FLORIDA VS NATIONAL STATISTICS

According to current flu activity on Flu Trends by Google, this season seems to be on the same track as last year, so we could see a spike from December to late January. Compared to last year, Florida started seeing a higher rate of flu cases than the previous year.

On a national level, the flu is following the same pattern as last year, with an expected peak from December to February. 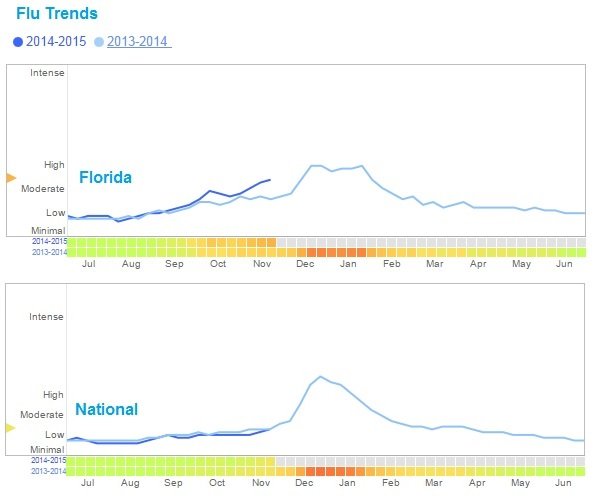 Simply put, the best way to prevent seasonal flu is to get vaccinated each year.

Usually available starting with October, the flu shot protects you from the main three or four flu types of viruses that research indicates will cause the most illness during the next season.

WHAT KINDS OF FLU VACCINES AND SHOTS ARE AVAILABLE FOR THE 2014-2015 SEASON?

The options for the flu vaccine this year include a shot that protects against the three different flu strains the World Health Organization predicts will be circulating. There are also shots that include protection against four strains.

Another option is the nasal-spray, especially used for children aged 2 to 8. The nasal spray uses four live flu virus strains that have been weakened. Healthy adults up to age 49 can also get the spray.The live-flu vaccine isn’t recommended for pregnant women, older adults and people whose immune systems are compromised.

Adults ages 65 can opt for a high-dose flu shot.

WHO SHOULD GET VACCINATED?

Centers for Disease Control and Prevention (CDC) recommends everyone between six month of age and older to get vaccinated against flu every year, with rare exceptions, such as those with severe, life-threatening allergies to flu vaccine ingredients or potentially those with a history of Guillain-Barré syndrome following a previous flu shot.

Everyone should get vaccinated but we strongly recommend flu shots for children, pregnant women and adults aged 60 to 65 – especially those living in nursing homes.

Because influenza can cause miscarriages, pregnant women should get vaccinated against flu to lower the miscarriage risk.

Adults aged over 65 have an immune system weakened by age which is placing them at greater risk of severe illness. The CDC estimates that 90% of flu-related deaths occur in people over 65.

WHEN SHOULD I GET VACCINATED?

Additionally, there are some good health habits that you can adopt to help protect yourself from flu and prevent it from spreading.

“Getting vaccinated against flu viruses before the season outbreaks is the first and most important step in prevention. After getting the shot, simple things like covering your mouth when coughing and washing your hands as often as possible are helpful. Try to avoid close contact or crowded places as much as you can, don’t touch your eyes, nose and mouth without washing your hands first to prevent germs spreading and most important, stay home if you are already sick. This way you can protect others from getting sick.” – Dr. Hossein Joukar, Medical Director & CEO RiteCare MC

ALREADY GOT THE FLU? HERE’S WHAT YOU CAN DO!

Influenza, or the flu, is a contagious respiratory illness that affects millions of people each year. Caused by flu viruses, mostly during the fall and winter season, it can take severe forms.

Flu outbreaks suddenly. The most common symptoms include fever (although not everyone with the flu will present it), muscle or body aches, chills, cough, a sore throat, a runny or a stuffy nose, headaches and fatigue. Nausea, vomiting and diarrhea are most common with children.

Untreated or superficially treated, flu can cause complications like pneumonia, sinus or ear infections and bronchitis.

DO YOU HAVE THE FLU OR A COLD?

They might seem similar, but flu is very different, first of all by its severity. While a cold can cause you some discomfort for a few days, the flu can really take you out of your plans.

Cold symptoms usually begin with a sore throat, which usually goes away after a day or two, followed by nasal symptoms and congestion. The cough usually breaks in after three or four days.

Flu symptoms can usually last for two weeks. The best time to treat the symptoms is as soon as they occur, before complications appear and before your body gets weaker as the illness takes over.

The best time to start administering antivirals is within 72 hours after the first symptoms appear. These drugs are prescribed by doctors and if administered early, they can shorten the length. If the symptoms persist or the treatment doesn’t respond, contact a doctor or go to the hospital.

HOW LONG ARE YOU CONTAGIOUS?

We recommend staying home at least 24 hours after the fever appears. It’s best advised to spend as much time as possible at home to avoid spreading the virus. if going out in public is necessary, wear a facemask.

According to the CDC, flu can be contagious even before the symptoms start. You may pass on the flu to others before you know you are sick, as well as while you are sick. Infection can start spreading one day before symptoms develop and up to five to seven days after becoming sick.

No iIlness is worth waiting it out. Take action!

We are all concerned about the COVID-19 Virus and we will continue to take your health and wellness very seriously.  RiteCare Urgent Care Medical Center will remain OPEN at this time.  We are closely monitoring and implementing any preventions guidelines that are put out by the CDC and HHS.

We will continue to operate and provide urgent care and treatment to patients.  Our number one priority is our clients and staff.